Finding Hope in the Belly of Tragedy: an Inspiring Account of One Woman’s Tale

In 2004 the world was rocked by the tsunami in Thailand and surrounding areas. Many deaths occurred, and many lives changed that day forever. 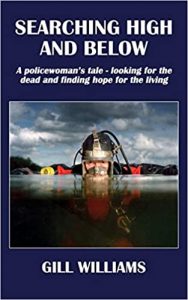 The author of this book ‘Searching High and Below’ Gill Williams was one of the frontline rescue and recovery to carry out the gruesome and horrific task of recovering bodies, informing relatives of the saddened outcomes and helping to put the pieces of shattered hearts together.

Gill would build a special relationship with the children orphaned and set out to rebuild their lives, giving them hope and a future with great success.

The book follows Gill and her team on the brutal reality of a tragedy, but it also brings with it some touching and uplifting moments blossomed from such a tragic event.

About the book:
This is an insight into author Gill Williams’ career in the Thames Valley Police, where she became one of the first female police divers and eventually the first female sergeant in charge of such a team in the UK, which led her out to Thailand to assist in the aftermath of the Boxing Day tsunami. Though gruesome at times, this story will have you laughing and crying at the same time.

Searching High and Below follows the real-life story of Gill Williams, who went from police cadet to becoming the first woman in the United Kingdom to be responsible for an underwater research unit.

IMAGINATION: More Than Just a Book